We recently found an interesting article from the Observer as part of their annual Christmas appeal, about war veterans using gardening as therapy.

The charity Gardening Leave uses therapy to draw lost soldiers out of their isolation. Now it needs help to reach more of them
• Click here to donate to the Guardian and Observer Christmas Appeal

‘On Bobby’s arm is his story. Northern Ireland, Bosnia, the Gulf – the conflicts, uniforms and guns are etched on his flesh. “Sometimes I regret the tattoos,” he said, “they’re a reminder. But then I’m not likely to forget any time soon, am I?”

Bobby left the army in 1997 but, like an estimated one in five men and women serving in the armed forces, his experiences have left him with serious mental health problems which have damaged his ability to cope with civilian life, broken up his marriage, ruined friendships and eaten away at his physical health.

“I’d give my legs if my head would be OK. If I could just have a night’s sleep. It’s like I’m in a time warp, stuck in that time, going over and over things. I’m like a squirrel locked in a squirrel cage. After I came back from the Gulf, my mother said I was a different person. The anger, the dreams.”

In Bobby’s time, the response to soldiers suffering from trauma-related stress was too often “give yourself a shake, you’re a soldier,” said Heather Budge-Reid, chief executive of the charity Gardening Leave. It’s one of the reasons why it takes, on average, a forces veteran 15 years to seek help. The charity helps 400 veterans a year at five sites, two in London and three in Scotland, and would like to reach more. It aims to draw these lost soldiers out of their social isolation and help them start to tackle their mental wounds, by working in a garden alongside professional therapists.

Bobby has been coming to Auchincruive in Ayrshire since just after it was founded in 2007. It’s an old stove house – a Victorian glasshouse in the gardens of a big estate that was used to grow exotic fruits for the gentry. Now owned by an agricultural college, the building, glasshouse and small garden space have been restored by volunteers. Two full-time mental health therapists work alongside veterans who come to garden, learn new skills, socialise with other veterans and soak up the benefits of a green and calm space. “You feel safe here,” Bobby said. “This place helps me forget, the banter and a sense of belonging. I’m one of the lucky ones, having this place on my doorstep. It’s like a big oasis, a safety bubble. Being with the boys and not being judged,” he said.

Two-thirds of the ex-squaddies here will have been diagnosed with post-traumatic stress disorder and a third with anxiety and depression, said Budge-Reid. “They suffer a lot from the idea of stigma; even if the wider public are starting to understand PTSD, the veterans have their own internal stigma. It’s a kind of survivor’s guilt, so there’s shame, huge shame.” About 80% of the veterans will have or have had a problem with alcohol. Obesity-related diabetes is another big health issue – the high calorific diet of an active serviceman doesn’t transpose well into civilian life, let alone the lack of cooking skills.

“As one man said, ‘if it can’t ping or ring, I don’t eat it’ – meaning microwave or a one-ring,” said Budge-Reid. “We find veterans will have a frying pan or a pot, generally not both. Because they have issues with crowds or people being behind them, going out to the shops is difficult. Thank God for supermarkets with late-night opening.”

Michael is in the garden’s pergola with two volunteers, local men who used to walk their dogs past the Auchincruive for years before finally coming in. “This place has saved my life,” Michael said. “I can’t speak highly enough of it.” He calls Budge-Reid “ma’am” and, like all the veteran, speaks reverently of the therapists. A year ago he could not have sat in such a confined space, never mind close to another human being. “The steps forward are small often, but we see them and it’s wonderful,” said Budge-Reid.

On one wall is a simple little plaque commemorating those who haven’t made it. Suicide attempts are an ever-present risk. A line of small wooden crosses leans against a wall where the veterans have had their own small remembrance service, marked with the names and dates of their personal losses, mates and comrades. These are men who have seen too much blood spilled.

“Their stories are their own and they don’t have to tell us,” said Budge-Reid. “Most of them have issues of concentration and shake constantly, so doing things like pricking out seedlings can be very difficult.”

For people with PTSD, everyday objects can trigger flashbacks. “A pine cone can feel like a hand grenade and metal bin lids had to go – in Northern Ireland they were used by people to signal the approach of soldiers. The smell of barbecues, cooking meat and fireworks are obvious.”

Christmas will be tough. Holidays always are, when support staff take well-earned breaks and routines change. Longer opening hours and more centres are what Budge-Reid and her staff dream of. “I’d love to be able to open on Saturdays,” said Budge-Reid, “and to reach reservists. And, of course, we haven’t started to see anyone from Afghanistan yet, but we will, very soon.”

Colin, who spent 15 years in the army, is taking photographs

in the garden. It took a long time before he could get a photo in focus, but now they are sharp and clear. “I’ve slowed down a lot; my life was always run at 100mph. Once I come through those gates it’s peace and quiet. You’re not looking over your shoulder the whole time, your head on a swivel, your moods changing like that,” he said, snapping his fingers. “It wasn’t until I came here and started talking to the other lads that I realised it wasn’t right. The army takes you in, breaks you, moulds you into what they want, but they don’t retune you to fit back into civilian life.”

Another Michael, a 49-year-old, has memory problems and has only recently been able to sit in a room with a closed door. He still sits close to an exit. He has become an expert grower of potatoes and leeks. “The staff here know how to talk to us; there’s no being judged. Coming through the door there’s a sense of relief.” Gardening Leave, he said, had given him “a new life”.

Budge-Reid beams at him. “We’re not here to cure them or to get them back to work,” she said. “We’re here to bring them back to life.”

About the Gardening Leave Charitty

Gardening Leave tends to the invisible wounds of conflict.

An estimated 20% of veterans carry a mental wound; and these need as much healing as any physical wound. Symptoms include flashbacks, nightmares, increased levels of anxiety, hyper-vigilance, insomnia, inability to concentrate, mood swings, intrusive thoughts, depression, possible psychosis, and substance misuse/self-medication. As a result many veterans become socially isolated, staying indoors and unable to work.

Whatever the cause of the mental health issues veterans – younger or older, male or female, with or without physical wounds – are referred to us to help support their healing and transition to civilian life.

Gardening Leave is a charity that focuses on the mental health of veterans. We support the World Health Organisation’s definition of health as “a state of complete physical, mental, and social well-being and not merely the absence of disease or infirmity”. The garden walls that provide a place of safety for veterans – many of whom suffer from hyper-vigilance and find open spaces difficult – should not hide them from their communities. Our organisation treasures the flower Honesty as a symbol of the honesty with which we believe mental health issues need to be dealt with.

The stigma of having a ‘mental health problem’ also prevents many from seeking help and increases socialisation problems. Gardening Leave also works to reduce stigma as part of its charitable mission.

Emotional – Improvements in self-esteem through becoming a care-giver rather than receiver and through successful food-growing; reduction in anxiety & depression; safe release of anger & frustration.

Diversional therapy – where people have something to do to distract them or fill their time as an alternative to doing nothing or spending time in a state of stress. Diversional therapy has many benefits, particularly in relieving hyper-vigilance, stress and depression.

Finding peace, strength and recovery in the garden

Gardening Leave uses horticultural therapy to support our troubled veterans on their journey to good health and their transition to civilian life. We offer professionally conducted, individualised, goal-oriented treatment sessions to maximise a veteran’s physical, psychological and social strength, and enhance general health and wellbeing.

The value of horticultural therapy is well recognised, particularly for people suffering with post-traumatic stress disorder (PTSD), anxiety and depression. Gardening Leave does not claim to ‘cure’ mental health issues but it does contribute to positive mental health outcomes. Our eventual aim is that veterans can either take up their own plans for the future or take advantage of other support offered to them by other organisations.

In the last five years, attendees have come to us from a wide range of military backgrounds across the Army, Royal Navy and Royal Air Force and from a variety of ranks, from Private to Warrant Officer. They may learn to work in a group or alone, begin to think of other things such as potting out or pruning, improve their diet by eating some of the vegetables they grow, learn to cope with disappointment when a plant fails, or plan autumn-planted bulbs to spring up in a coordinated display. They may learn to deal with agoraphobia or have their first conversation with a civilian in years. Peace, strength and recovery can be found in the garden.

The garden of peace: helping veterans heal the mental scars of war 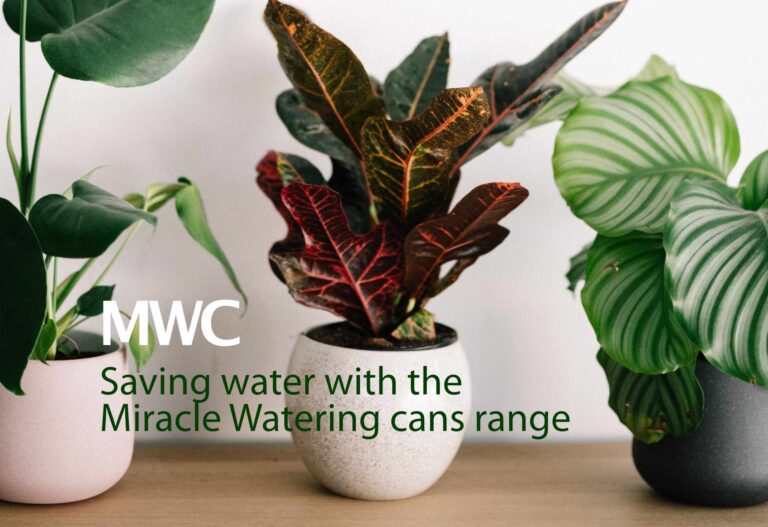 Saving water with the Miracle Watering cans range If your resolution this year is to do more to help the environment, then one small step you can take is to use a Push Button Watering Cans. We all try to our bit to help reduce our impact on the environment, whether it is recycling our…

When water is short sprinklers are wasteful – and illegal, too, in some areas. These easy-to-use devices make what water there is go further in the garden. Helen Yemm’s favourite, the NuCan, is the world’s only push-button watering can. This blindingly simple idea gives you complete control – water flows at the speed you want,…

‘NEWPORT-based inventor Paul Bone has created a highly accurate indoor watering can, which has won the praise of film star and gardener Sir Norman Wisdom. Mr Bone, of Lizant Innovations, is already well known as the creator of the popular NuCan outdoor watering can. But his new Pinpoint indoor watering can is the first with…

‘Large can with control valve The Nucan is a lightweight, narrow profile plastic watering can that has a button at the top of the handle to control the flow of water. The control valve reduces the degree to which you will need to tip the can and therefore helps to reduce arm strain. Narrow, flatsided…

Our Nucan and Pinpoint watering cans make the ideal Christmas present for the family and friends who need a watering can as they are keen gardeners or indoor plants to water, but you need to get your orders in quick for delivery in time for Christmas 2014. Our order deadline is 5pm on Friday 19th December,…

No products in the basket.